It’s certainly been a while since I’ve been on here but I do hope everyone is safe and coping with the global lockdown situation?

I can’t quite believe it’s been nearly 6-months since my last post!  As I mentioned last time I’ve now got my art/craft site up and running so this site is reverting to being my personal blog space so, for the first time in a long time, here goes.

Although I work from home anyway, it has taken me quite some time to adjust to our current new ‘normal’ – I’m sure that’s absolutely the case for millions of others too!  I don’t know about you, but I’ve been left feeling less than adequate at times when I see on social media what other people are (apparently) getting done during this period.  Getting fitter, keeping homes spotless, cooking better, healthier meals and experimenting with recipes, DIY jobs getting done or finished all over the place etc., etc, and I take my hat off to each of them I really do – but for me….

… well, I’m more like a headless chicken!  I can see loads of things that need doing, there’s loads of things I’d like to do yet with all this so called ‘extra time’ on my hands I can’t seem to get myself focussed or motivated 🙁  Is anyone else feeling a bit like that?

One thing I have managed to do which I’m quite pleased about, is get our garden office/my craft room decluttered and reorganised, so it went from this… 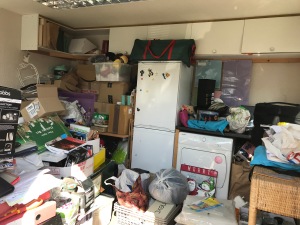 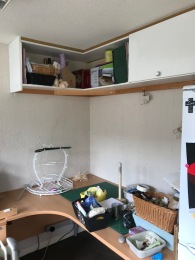 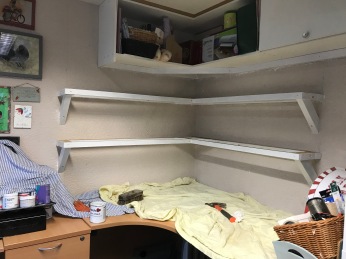 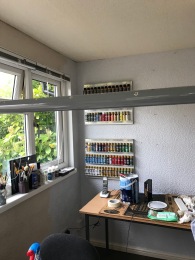 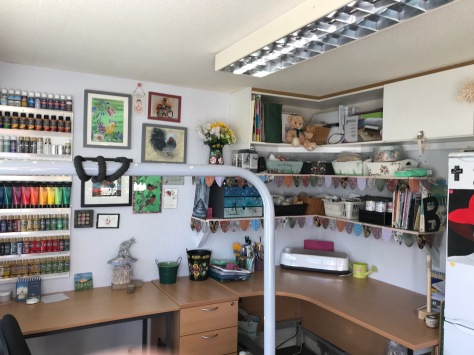 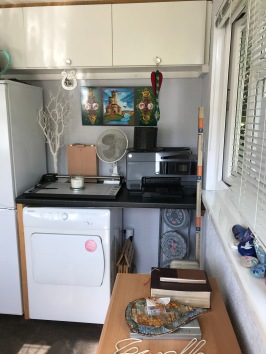 But now it looks like this… so much better!

We had  used it pretty much as a dumping ground for things we no longer used or needed, plus a place to put the Christmas decorations because we were too lazy during the winter to get them up into the office loft 🙄  What a difference now it’s done, a little escape haven as well as been a much more usable space.  It should have been done a long time ago but now, with open-plan living it became an absolute necessity so that the kids use more of our home for their schooling.

At some point, hopefully before the weather turns typically British again, I’ll get round to freshening up some of the garden furniture with a lick of paint, for now though that can wait.

Until next time, stay safe folks.

This site uses Akismet to reduce spam. Learn how your comment data is processed. 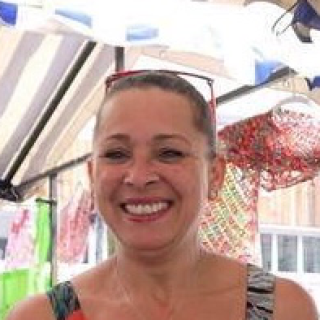 A woman of faith, mum, nanna, wife, sister and more. I work part time as an administrator and the rest of my time is spent doing and/or teaching Folk art and crafts. You can find out more about that side of things at www.thearcshed.co.uk but this site is for my personal reflections (and no doubt the odd rant) on life, my faith and everything else in between. If you have to be anything - be kind Vanessa :-) x